California’s Water Commission is in the process of creating regulations for how to spend $2.7 billion that taxpayers approved to fund new surface and groundwater storage projects. This was part of Proposition 1, a water bond, passed in 2014.

It’s a chance to set the stage for a new era of water management and infrastructure in California and Dr. Juliet Christian-Smith wants to be sure the state is using the best climate science when considering the criteria for which projects to green-light.

It makes sense. If you’re planning to build a project that lasts a century you should be using climate modeling that considers what the world will look like in a hundred years. Except so far, that’s easier said than done. But Christian-Smith hopes that is about to change, because this year is looking like it will be a crucial year in deciding the future of California’s water.

Christian-Smith talked to Water Deeply this week about why 2016 is a tipping point for water in California and how the drought has tested the limits of our 20th-century water management system.

Four years of drought have just been too severe, they said, and it was uncertain that the rains would fall where they were needed most: in the northern mountains and valleys where California’s water systems begin.

But after two months of steady rain and snow across Northern California, officials are beginning to see some rays of hope. Click here for full article.

By Ed Joyce – Recent storms have brought more improvement, however slight, in the historic four-year drought in California over the past week.

The U.S. Drought Monitor says the percentage of severe and extreme drought was reduced in extreme northwestern California and southwestern and south-central Oregon.

“This doesn’t mean the region is drought free by any means, but it’s certainly a good start to the Water Year as we sit near the mid-point of the snow season,” according to the weekly update. “Now we’ll see if Mother Nature finishes strong or changes her mind.” The California Water Action Plan – originally released by the administration of Governor Brown in January 2014 – is a roadmap for the first five years of the state’s journey toward sustainable water management. The 2016 update reflects both considerable progress toward and reaffirmation of the goals first set forth in January 2014. Read the 2016 Update of the Plan here.

by Susan Greene, LA Times. California’s forests have already lost millions of trees in recent years due to rising temperatures, the drought and a plague of bark beetle infestations. But if the drought persists, millions of more trees throughout the state could die, according to a study published this week in Proceedings of the National Academy of Sciences. Click here for full article. 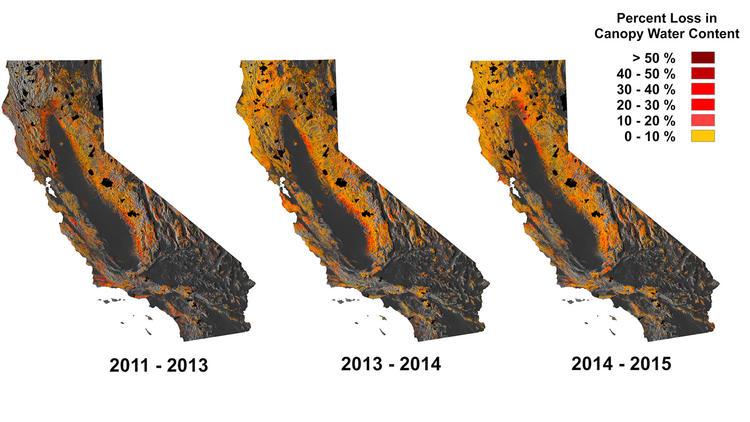 For more information, send an email to UFR.contact@gmail.com.